Every day we learn vocabularies that are unfamiliar to us, and soon forget about them as our memory naturally fades away. In the very moment of looking up a word’s definition, there is a vague sense of confidence that we have firmly grasped the meaning of the new word. However, at that moment our relationship with the new vocabulary is at its most vulnerable.

I find that unless we write down what we learn and revisit them periodically, our learnings quickly expire. I can speak from personal experience because tragically enough I have created a graveyard of words. More specifically I have created a notebook in which I have been mindlessly burying vocabularies for the past two years.

Whenever I learned new words, I chucked them into this notebook with little attention to whether I was remembering their meanings. I instead paid more attention to my ego and the satisfaction of feeling smart for a moment. However, three months ago, as I was piling yet another word onto the graveyard of a notebook, I realized that the ground was filled with dead words because I had never bothered to look twice at them.

In this light, I found myself in need of automation that would make me revisit the words I learn. And I decided to use an open-source software I wrote a year ago. It was Dnote, a program to quickly write down things using a command-line and send myself weekly digest of them. Yet, since I mostly learn new vocabularies while reading books on Kindle in my browsers, I extended it by making a browser extension.

For the past three months, I have been using this browser extension to write down new vocabularies and receive weekly digests. Whenever I read a word I that did not know, I hit Cmd + d to open the browser extension, wrote down its definition, and copied the sentence in which the author made use of that word. Then I hit Shift + Enter to save the note and went immediately back to reading. I have tried this method while reading The Unbearable Lightness of Being by Milan Kundera and The Rebel by Albert Camus.

During this period I was able to write down 58 new vocabularies and reminded myself of them automatically every week.

Here are some observations about my journey. They might reveal something interesting about how we should approach learning vocabularies and beyond.

We Forget More Easily Than We Think

Our understanding of a new idea goes away more quickly than we might realize, no matter how convinced we are at the moment of its conception. For instance, I wrote two duplicate notes for the same vocabulary in five days. Each time convinced that I had learned that word.

Writing the duplicate note, I was completely oblivious of the fact that I had learned the same word merely five days ago. Here is my first note about the expression “bent on” and here is the duplicate that followed. I feel that, had it not been for the weekly reminders, I would have never realized that there even had been duplicates. Maybe one day I would have gone on to create yet another one. 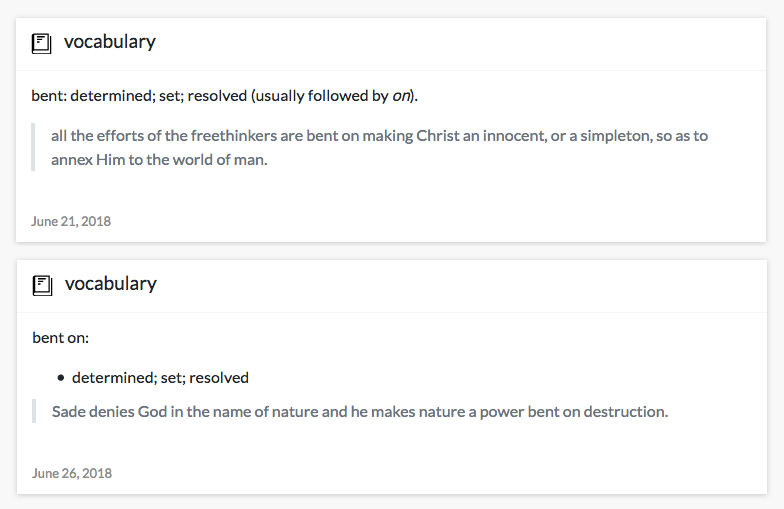 If some ideas still manage to escape our memory in spite of our conscious effort to capture them, how confidently can we claim that we have learned them when we have no such efforts at all? We often overestimate our ability to remember new concepts because when we have just learned them, our memory is the freshest. Yet at the moment, when we are basked in the rewarding feelings of becoming more intelligent, we need to discard the self-assurance and maintain a healthy skepticism about our ability to remember.

Preserve the Context in Which Learning Occurs

We remember the context of learning more vividly than the learning itself. If we can preserve the context in which an idea became familiar to us, it would be possible to re-live that moment later when the idea is not so familiar anymore. 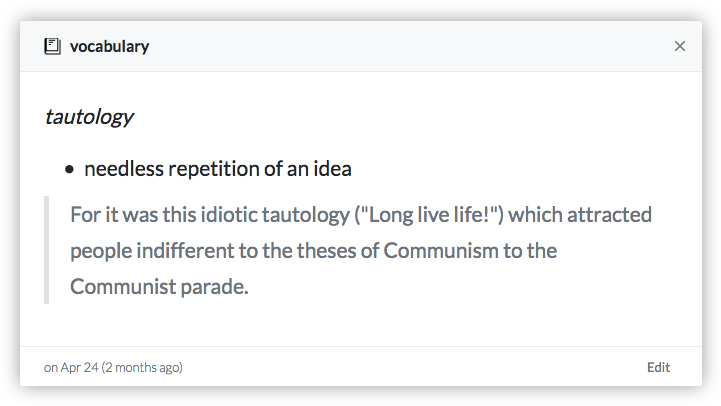 For instance, I could not remember the exact definition of the word tautology days later I wrote down this note. Yet in the note, I had written down the sentence in which the vocabulary appeared to me. Reading the note months later, I could remember that tautology was the word that Kundera used to describe the motto “Long live life,” in his book The Unbearable Lightness of Being. And the word made sense again.

Through the preserved context of learning, I was able to briefly go back to the moment when I learned the vocabulary and learn it once again. We are all privileged to be able to learn and expand our knowledge. But we need not stop there. We should go one step further and enjoy the luxury of affirming our knowledge by learning ideas once again.

It seems that re-living the context of learning is particularly effective because there is nothing artificial about it. We are not engineering a situation in a hope to understand an idea. Rather, we are experiencing again the serendipitous moments when our paths crossed with an idea. Though an idea might not be clear in our brains, the encounter with it tends to be fresh in our hearts.

I have tried many times in the past to learn new vocabularies but always felt that my attempts were forced and unnatural. Most notably, I memorized thousands of vocabularies in high school to prepare for the SAT by going through many vocabulary books. Nothing was enticing or beautiful about doing so. No context bound the words and me together. I always struggled to memorize the words and to this date cannot care enough to remember much of them.

The difference between then and now is very subtle because on the surface two methods look quite similar. Those SAT books presented the vocabularies in the same manner as my notes: a word, its definition, and an example sentence. I have a hunch that I struggled then compared to now because no context related me personally to those new ideas.

In other words, the missing ingredients were the happenstances that inextricably linked together the ideas and me. The mere act of stumbling upon something on our terms can define what it means for us. And here it becomes clear that learning is not about memorizing. It is about recognizing an idea and preserving the context that makes an idea unique to us, strengthening the relationship between us and it.

By continually revisiting the vocabularies I encountered throughout the books, I was able to notice that authors had a set of words that they repeatedly used. For example, in The Rebel, Camus keeps using words such as ‘excess,’ ‘rampart,’ and ‘sublimation.’ Such a pattern was not obvious to me in the past mostly because I never looked twice at words that I thought I had learned.

When we can spot and learn these frequently used vocabularies, we can deepen our understanding of the book as we come to appreciate more closely the little idiosyncrasies of authors. Moreover, the books themselves end up serving as reminders of newly acquired vocabularies because it keeps repeating them to the readers. To unlock these possibilities, all it took me was a little effort of writing down new words, and no effort of revisiting those notes because I automated it through software.

By and large, we are separated from the author to the degree that we do not understand his or her language, and we can close that gap. By constantly paying attention to the words we do not understand and the author keeps using, we can truly comprehend their meanings and learn to speak the language of the author. I find that, many times in the past, I was not able to recognize such a divide because I was so self-confident in my ability to learn that I forgot to pay the needed attention to things that I had not known thus far.

That was the story of how I hacked my open-source software to increase my vocabulary. Or was it? It might well be a story about how I accidentally realized our propensity to forget. It might well be a story about the beautiful happenstances that naturally brings us closer to the unknown. After all, there is more at play here than a mere experience of learning 58 new words with the aid of a homegrown technology.

Learning assumes that we are in the know, yet very rarely do we truly understand what we claim to have learned. In Death in the Afternoon, Hemingway writes that “the great thing is to see and hear and learn and understand; and write when there is something that you know; and not before; and not too damned much after.” That, seems to me, is all we ought to do as learners. No, this is not a story about how I memorized some vocabulary using code. This is a story about that great thing. It is a story about the great thing that, no matter what, will inculcate unfamiliar ideas onto our very beings.

Dnote is a simple personal knowledge base for programmers. Capture new information and neatly organize them into books. Take it with you wherever you go!

A new design for Dnote blog was launched.

I've just launched the Dnote web client. You can now create, read, update, and delete notes all within the Dnote website.